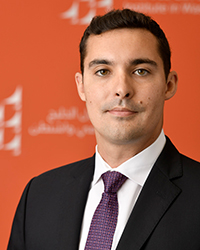 Sovereign Data: The Development and Marketing of Bahrain's Digital Domain

This paper explores how fragmentation, polarization, and hybridity dynamics in cyberspace unfold across the Gulf region by examining the case study of Bahrain. The paper utilizes personal data and insights from two ongoing research initiatives: i) trips to the Gulf in May and December of 2019 as part of the author’s long-term research series “Next Gen Gulf,” which examines how advanced technologies shape Gulf Arab governments and economies and ii) materials collected for a forthcoming book chapter about technology-focused investment flows between Gulf countries and China in The Routledge Handbook of China – Middle East Relations (2021).

Employing a political economy-focused analytical lens, this paper argues that the Bahraini government seeks to portray responsible state behaviour in cyberspace by closely aligning its digital domain with commercial development initiatives. The resulting economic-oriented approach to cyberspace has helped Bahraini officials sign large-scale commercial agreements with multinationals and attract foreign direct investment. However, this government-led approach has not clearly demarcated the various boundaries of cyberspace, and therefore the conditions remain for continued contestation over technology and politics in the country.

The proposed paper begins with an in-depth description of Bahraini government efforts to develop the key components of the country’s digital domain. The work then illustrates how the country’s government marketed its digital capabilities and regulations to external actors in a manner that conveyed established norms and a propensity for responsible state behaviour in cyberspace. The conclusion identifies the political ramifications of Bahrain’s commercial initiatives involving cyberspace and outlines steps the government can take to strengthen norms and encourage responsible behaviour.