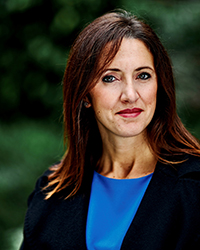 Dr Mariarosaria Taddeo is Senior Research Fellow at the Oxford Internet Institute, University of Oxford, where she is the Deputy Director of the Digital EthicsLab, and is Defence Science and Technology Fellow at the Alan Turing Institute. Her work focuses mainly on the ethical analysis of Artificial Intelligence, cyber security, cyber conflicts, and ethics of digital innovation. Her area of expertise is Philosophy and Ethics of Information.

She has received multiple awards for her work, among which the 2010 Simon Award for Outstanding Research in Computing and Philosophy; the 2016 World Technology Award for Ethics. In 2018, InspiringFifty named her among the most inspiring 50 Italian women working in technology, in 2020 she was listed as one the top 100 most influential women in UK technology by ComputerWeekly. In the same year, ORBIT listed her among the top 100 women working on Ethics of AI in the world. Since 2016, Taddeo serves as editor-in-chief of Minds & Machines (SpringerNature)and of Philosophical Studies Series (SpringerNature).

Her research has been published in major journals like Nature, Nature Machine Intelligence, Science, and Science Robotics.

Deterrence and Norms to Foster Stability in Cyberspace

Deterrence in cyberspace is possible. But it requires an effort to develop a new domain-specific, conceptual, normative, and strategic framework. I will argue that to be successful, cyber deterrence needs to shift from threatening to prevailing. At the same time international norms defining legal boundaries for state-run and state-sponsored cyber operations; strategic alliances to foster and consolidate technical capabilities; and monitoring and enforce rules by running investigations into suspectedState-run (or State-sponsored) cyber operations, (iii) expose breaches of norms, and (iv) impose adequate sanctions and punishments.